A heartbroken dog can’t help but cry after being abandoned at the shelter! 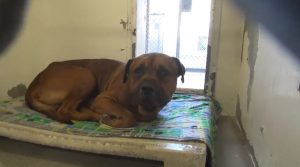 Dogs are some of the most loyal creatures. They are considered man’s best friend and will always be there to comfort you, welcome you into your home, walk with you, and protect you from harm.
There is no doubt that these furry animals also feel devastated when abandoned by the people they trust and love.

In February 2016, a 6-year-old pit bull and Labrador mixed breed dog named AJ was emotionally distraught when his owner dropped him and his canine brother Toby off at the Carson Animal Shelter in California.

AJ and Toby were abandoned because their owner could no longer afford to care for them. This betrayal broke AJ’s heart.

The footage shows AJ’s lovely eyes brimming with tears, his face contorted with stress and agitation. A woman’s voice can be heard trying to soothe him, but to no avail.

According to a Facebook post by Carson animal shelter, AJ and Toby both struggled upon their arrival at the shelter, becoming ‘sad and confused’:

Sweet AJ is beautiful and he has amazing energy and he was surrendered with his beautiful brother TOBY. They did great walking on a leash next to each other when they came in but now they are confused and alone and missing each other and home. They need help.

AJ is 100% pure sweet, gentle, loving beauty, he loves other dogs and he is missing his brother, He is shutting down, he has a cold and he needs your help…

The video of AJ crying went viral, watched by over five million people.

Animals lovers were urged to share the post in a bid to find the two heavy-hearted hounds forever homes, with many humans were deeply moved by the sorrow exhibited by the dejected dog.

I cannot read this. Just seeing that poor dog with tears in my eyes makes me want to cry, then I’m feeling sad and depressed. Some people don’t understand that dogs have feelings just like us.

I don’t think he realises the extent of what’s happened but he’s certainly upset by it. Breaks my heart.

Thankfully, the campaign to find AJ a new family worked a (doggy) treat, and the once cast down canine’s tears have been replaced by a big, goofy grin.

Amazingly, the family decided to adopt both AJ and Toby; ensuring the bonded brothers remain by each other’s sides through every walk and nap time.

This beauty touched the hearts of a lot of people and today he was lucky enough to take his FREEDOM Walk out of the Shelter, even while he is struggling with a cold.

He was rescued and we are hoping tomorrow that Rescue will work with the different Rescue that is saving his Bonded Brother TOBY, so they can be reunited. Both have been seriously depressed since they were separated… Happy life sweet AJ.

Here’s to some happier times in the future for AJ and his beloved brother Toby.