Kyle Smith and his dog Bodza have lived through a lot together. As members of the U.S. Air Force, they’d both once spent 189 cold and bitter days in Kyrgyzstan while on a security mission.

So, when Bodza, an 11-year-old German shepherd, was on his deathbed, Smith didn’t imagine being anywhere else but by his side.

Bodza the military dog with his owner, Kyle Smith 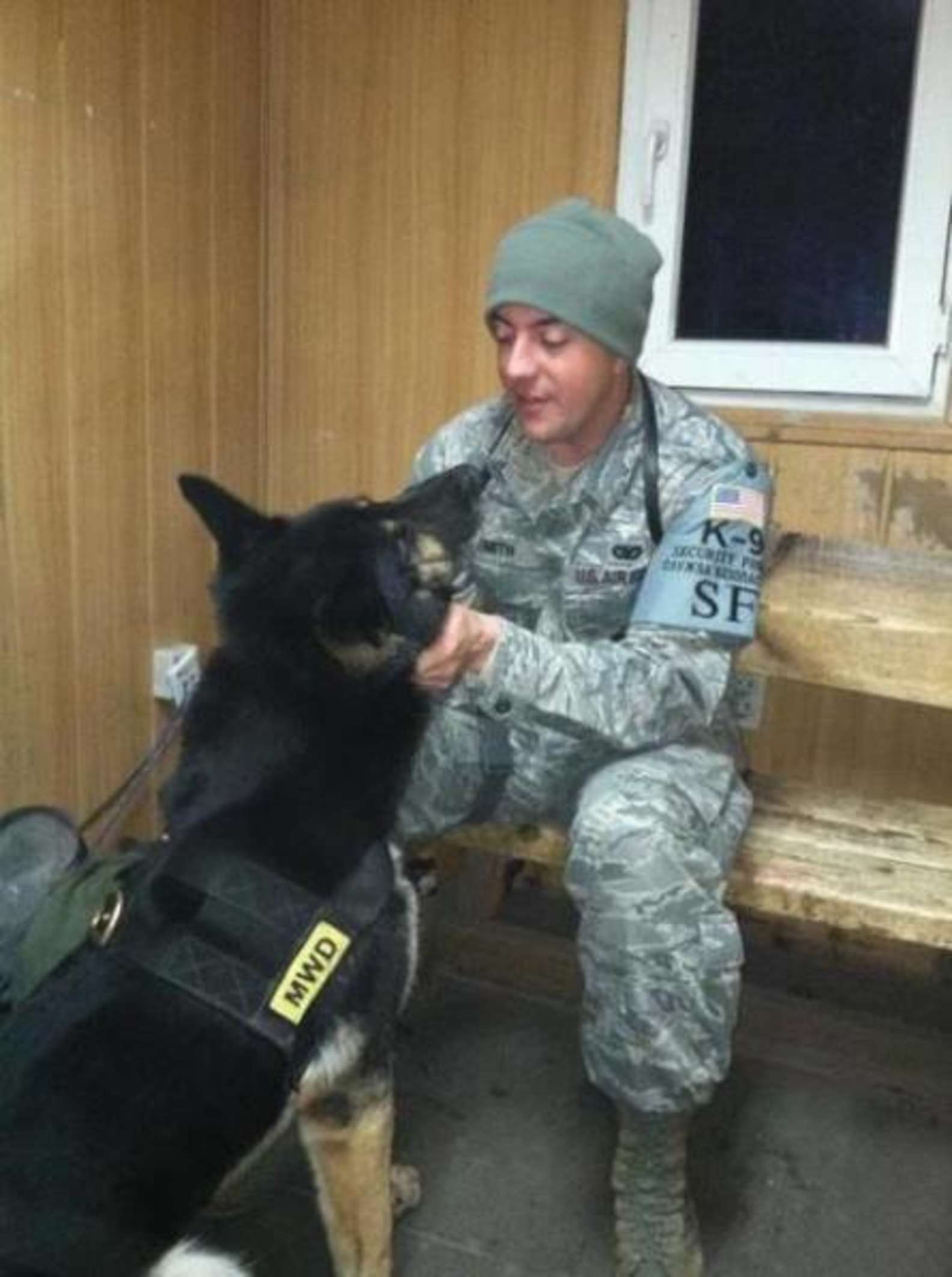 Since 2006, Bodza had worked with the U.S. Air Force as an explosive detection dog, and he’d helped save human lives by sniffing out bombs in operations in Iraq, Kyrgyzstan and Kuwait. Smith didn’t start working with Bodza until 2012, but the two of them formed a fast and lasting friendship.

“I loved working with him because he taught me a lot – patience as a young handler, and how to understand that this job isn’t just about you,” Smith told The Dodo.

Bodza, a dog who works for the U.S. military as a bomb detector 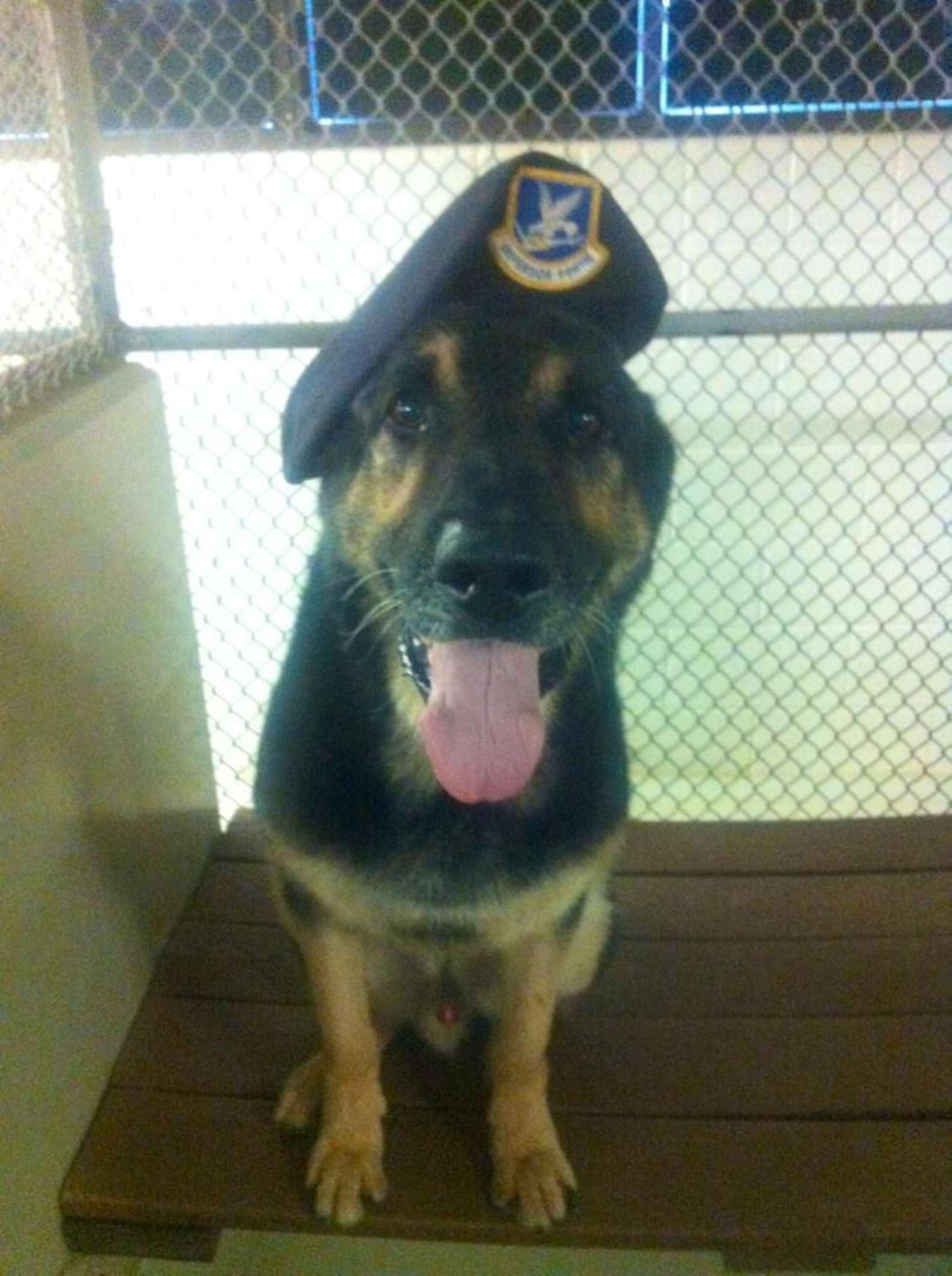 But it wasn’t all work for Smith and Bodza – they also got plenty of time to play.

“Bodza was a goofy and gentle dog,” Smith said. “We had horse stables directly beside our obedience yard and when [the horses] were out, no obedience was going to be done. He’d run the fence line continuously.” 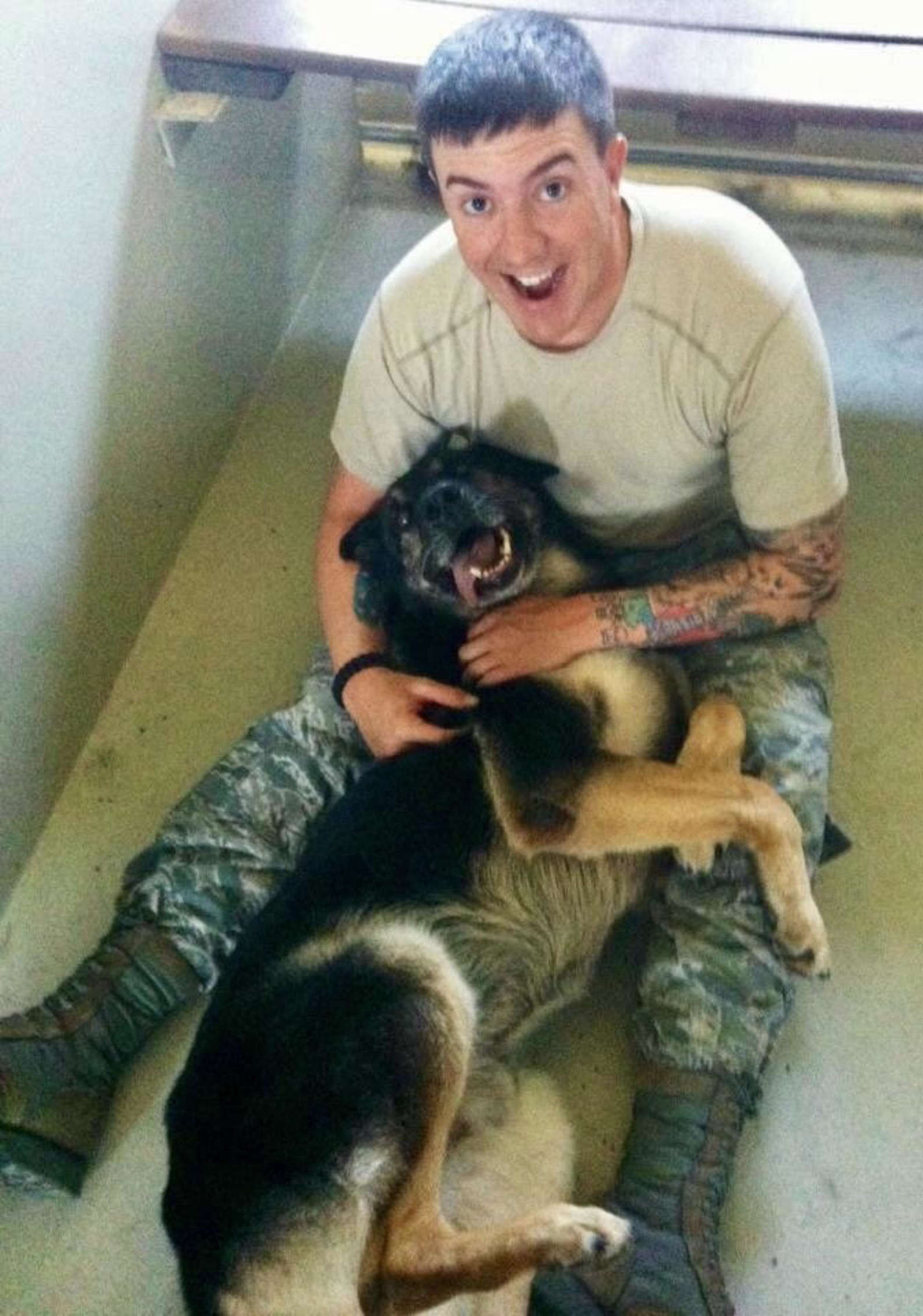 “He liked to bark at his own shadow, so I’d always mess with him that way – make my hand a shadow on the ground and move it,” Smith said. “I guess he thought it was a rabbit.”

When the day came for Bodza to retire, Smith didn’t think twice about adopting him. “I took him home the same day,” he said.

“He was even more loyal at home,” Smith said. “He followed me around everywhere. He would lay his head down flush with the bed and tell me good night, every night.” 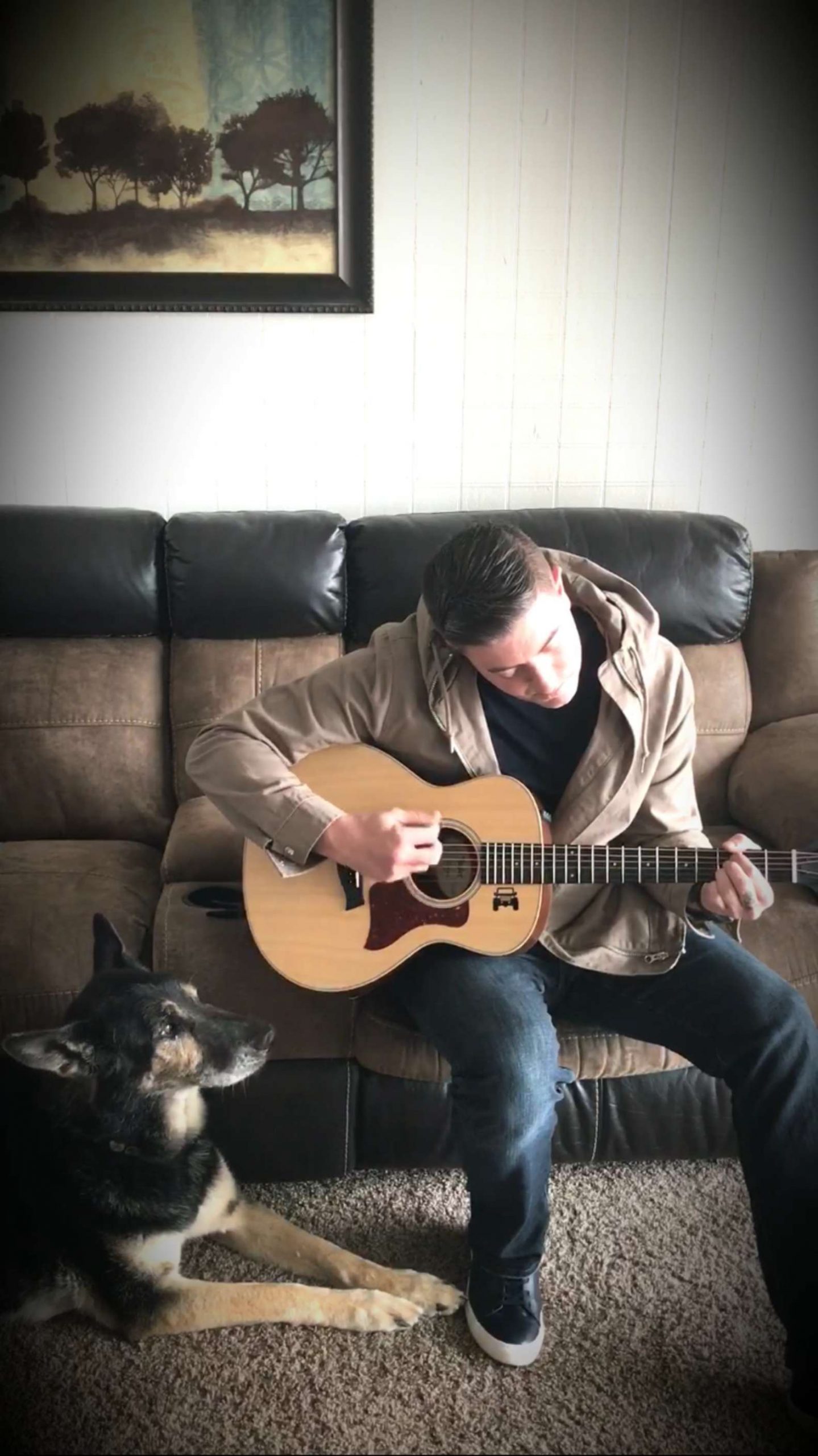 Then in the summer of 2016, Bodza was diagnosed with degenerative myelopathy, a progressive – and incurable – disease affecting a dog’s spinal cord.

“His hind limbs lost their use and he could barely stand up anymore, much less walk,” Smith said. “He couldn’t handle the stress on his body and using the restroom was a task.” 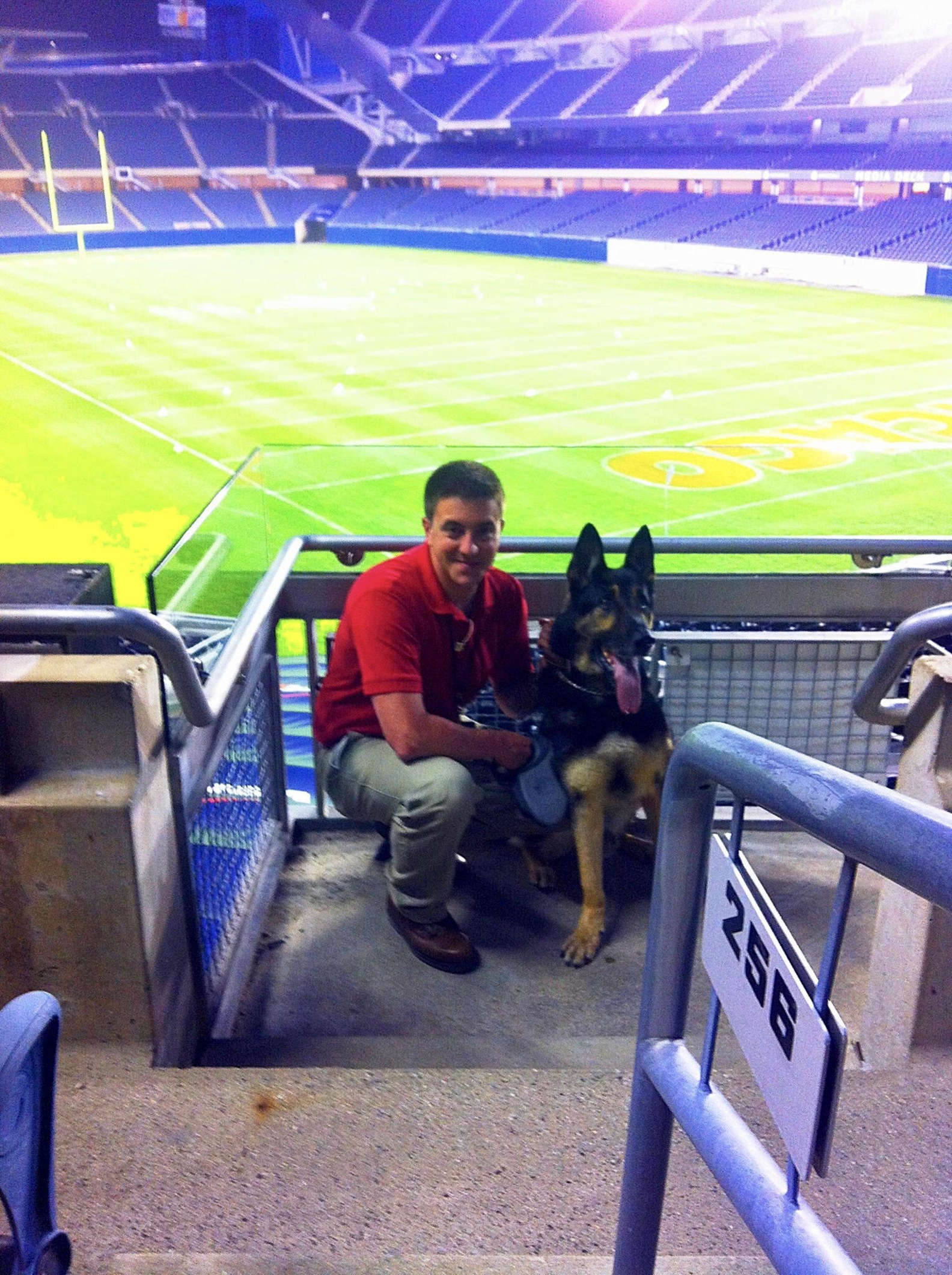 Knowing how hard Bodza’s life had become, Smith made the decision no dog lover ever wants to make – to put Bodza down.

When the day came last week, Smith, along with nine of his coworkers, took Bodza to the Fort Bliss Vet Clinic in El Paso, Texas. They laid a blanket on the floor, and made sure that Bodza felt as comfortable as possible. 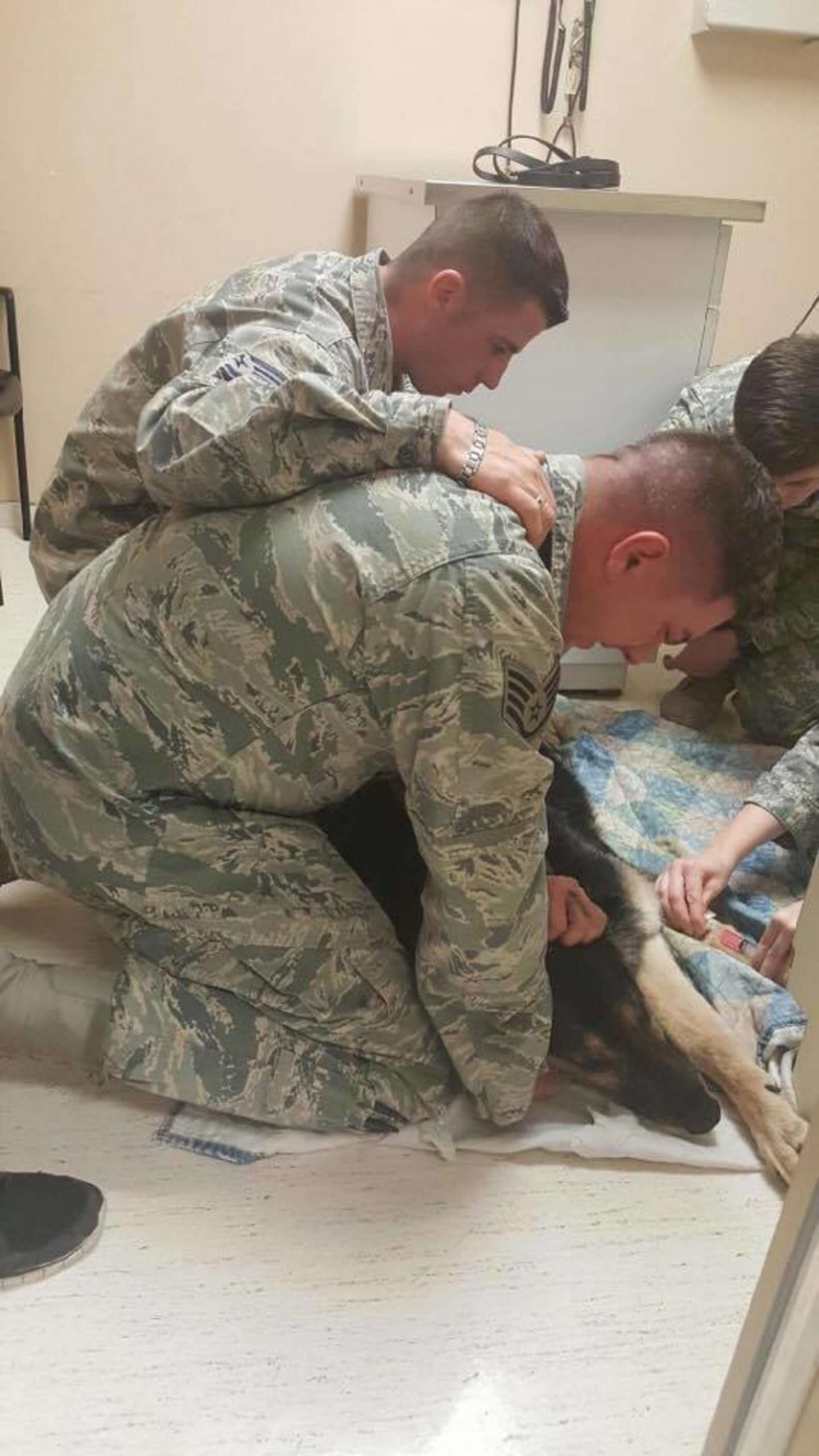 “I was holding Bodza as he passed,” Smith said. “It was a rush of so many things. It was just overwhelming.”

Despite the sadness Smith was feeling, Bodza seemed happy in his last moments. “He had a smile on his face when he was getting put to sleep,” Smith said.

When Bodza finally passed on, Smith broke down. Luckily, his coworkers were there to support him.

Solider Kyle Smith crying over the body of his beloved dog, Bodza, who once worked as a bomb detector for the U.S.air force

“They let me sob like a baby,” Smith said. “They pat me on the back and let me know it was going to be all right. My boss immediately went and grabbed a flag, and draped it over him and let me have a final moment.”

“It was incredible,” Smith said. “There was heartache and peace all at once that came over me.”

Solider Kyle Smith crying over the body of his beloved dog, Bodza, who once worked as a bomb detector for the u.s. air force. 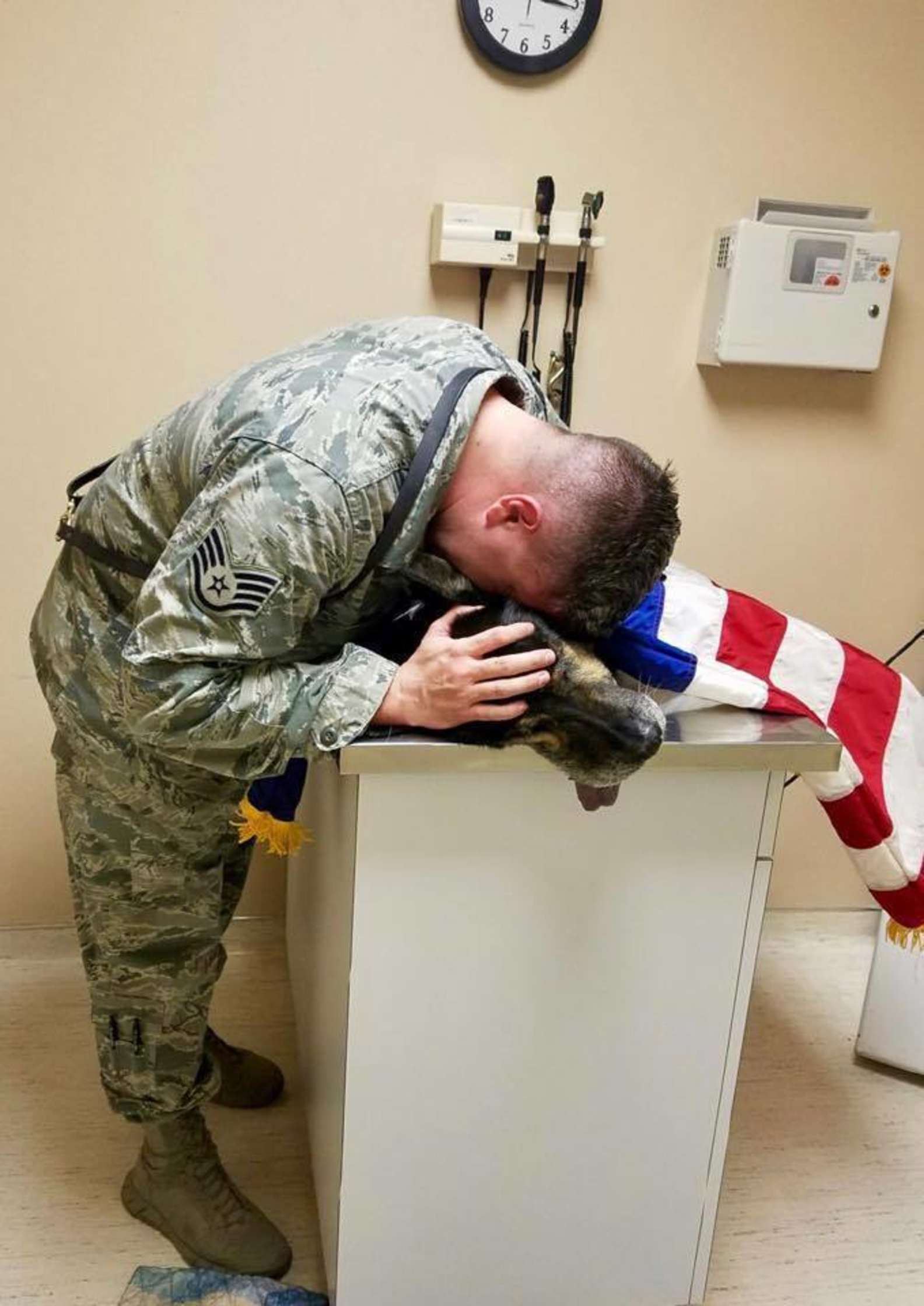 Smith had Bodza cremated, and keeps his ashes at home, along with photos of his best friend. He also keeps Bodza’s collar on the rear view mirror of his car.

“I will never forget how loyal he was,” Smith said. “He was selfless – more than any human I’ve ever known. He’s done so much for next to nothing and did it with a smile. I miss him every day.”