The puppy had been born without his front legs. And while his mother didn’t reject him, Nubby didn’t have the strength to get past the other puppies to eat.

“His siblings were pushing him out of the way. He would have perished,” Lou Robinson, Nubby’s foster mom, tells The Dodo. “He came home with me.”

Robinson is a longtime animal rescuer based outside Houston, Texas, and founder of a group called Warriors Educate About Rescue – through which Robinson teaches classes about how to compassionately care for animals, and puts out a calendar featuring Texas firefighters with rescue pets.

Nubby, in other words, is in good hands.

And, frequently, on a good shoulder – that shoulder belonging to Robinson’s husband, Mark. 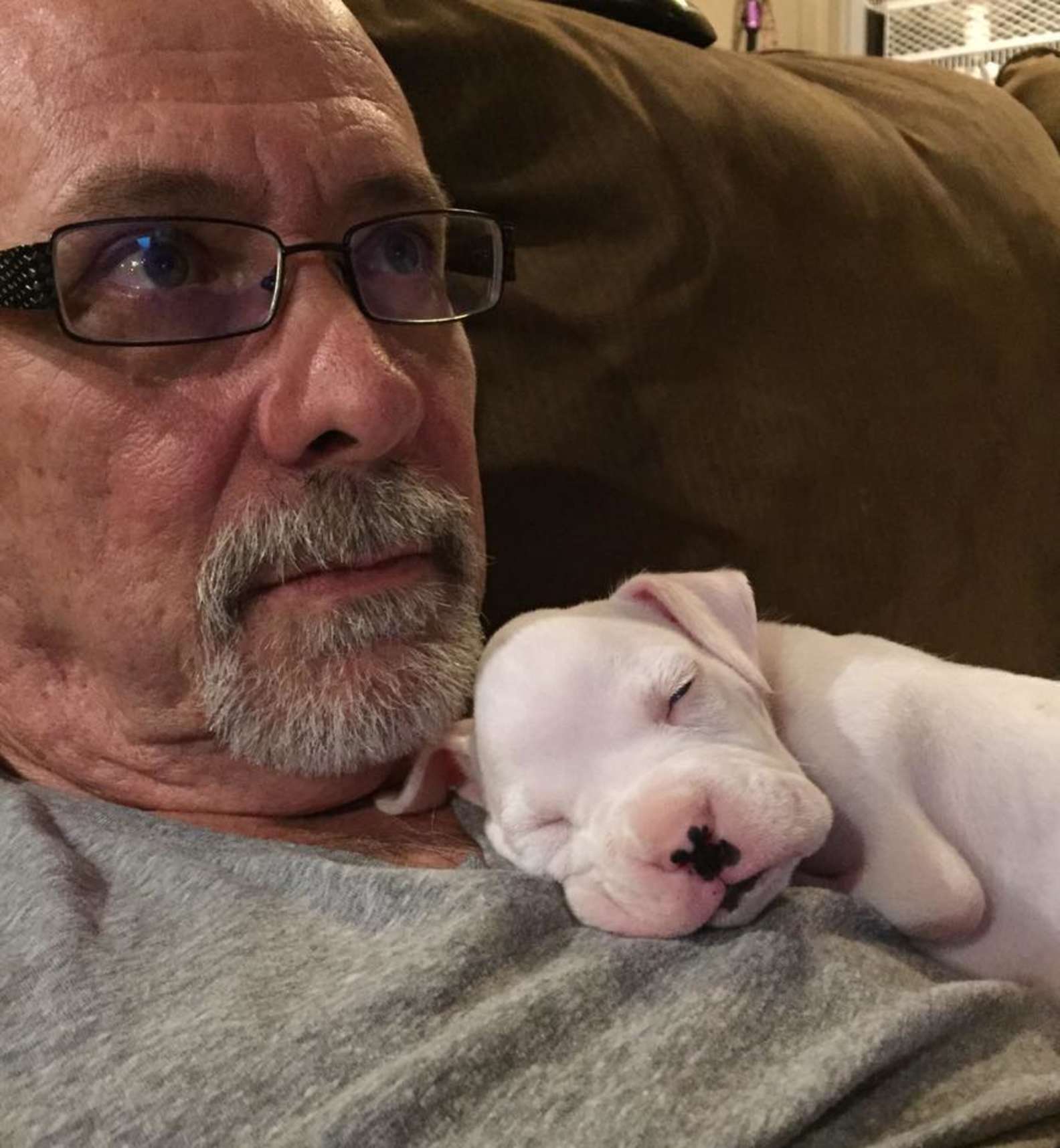 The couple researched all they could to find out how to keep this newborn puppy alive.

They learned, for example, that Nubby would have to be bottle-fed at an incline – to make sure that the puppy formula wouldn’t be inhaled into his lungs, causing aspiration pneumonia. 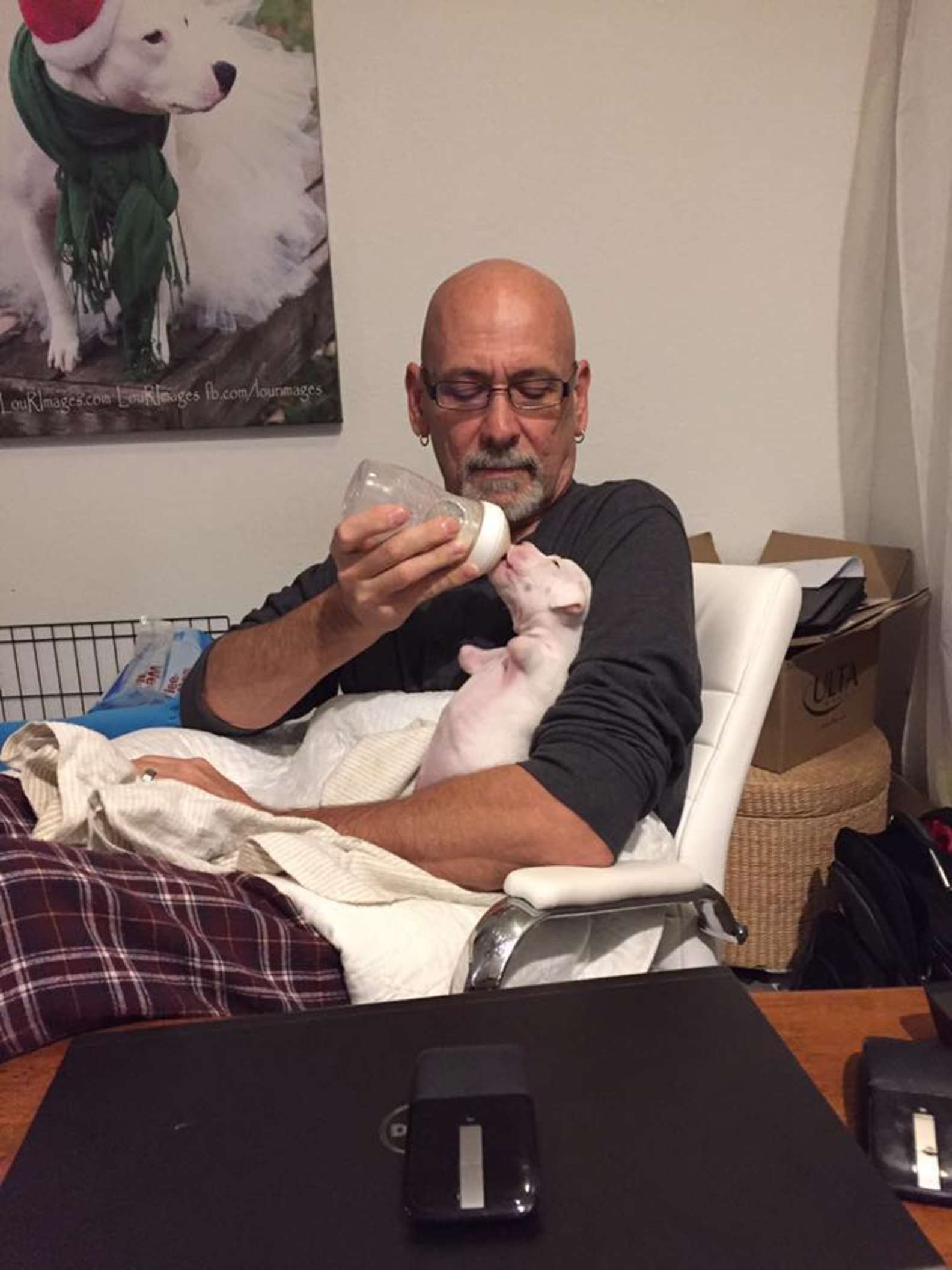 And then one Friday afternoon, just a little over three weeks after he’d arrived, things changed for the worse.

Nubby was sneezing. He wasn’t pooping. He didn’t seem to want to eat. He was blowing milk bubbles out of his nose.

“He was going downhill,” says Robinson. 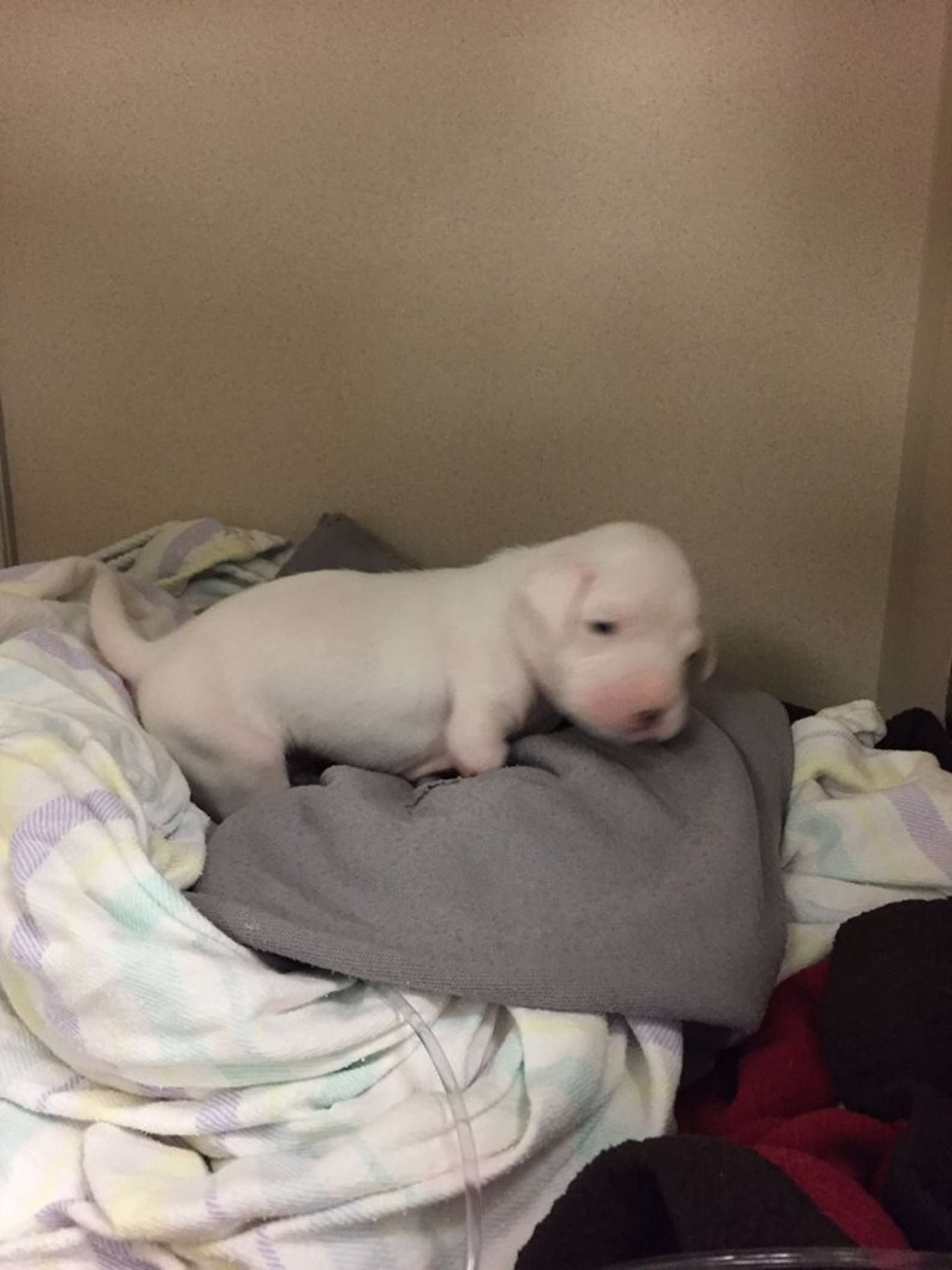 X-rays revealed that Nubby didn’t just have the dreaded pneumonia. The 3-pound pup had an “esophageal abnormality.”

“He had a pocket form in his esophagus that was trapping his milk,” says Robinson. 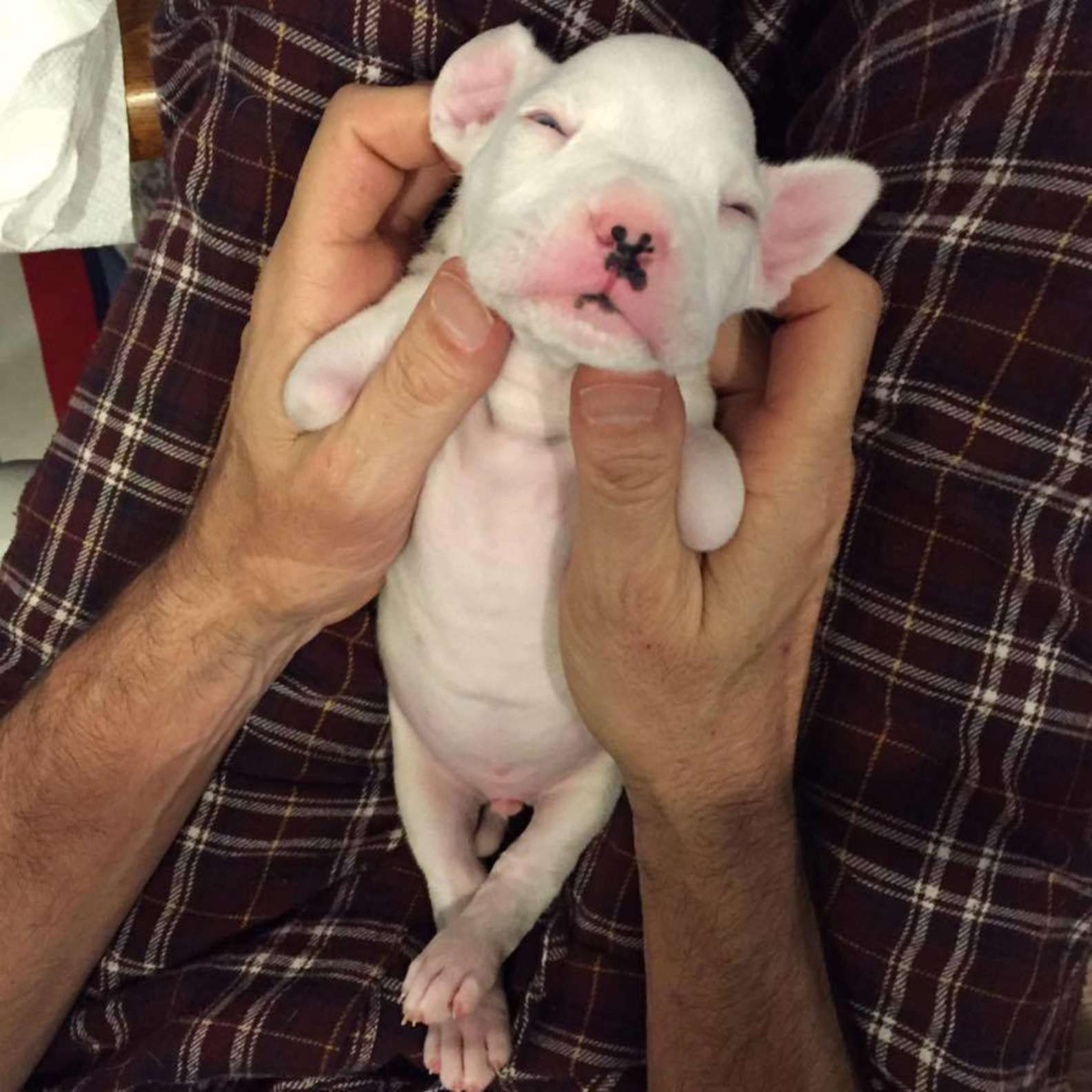 Nubby was given an IV full of heavy duty antibiotics and placed in an oxygen chamber.

He struggled to breathe, but Robinson saw he “was picking back up.”

“He was not giving up. He was fighting,” she says. “And as long as he has a chance at quality of life, we will fight to give him that chance.” 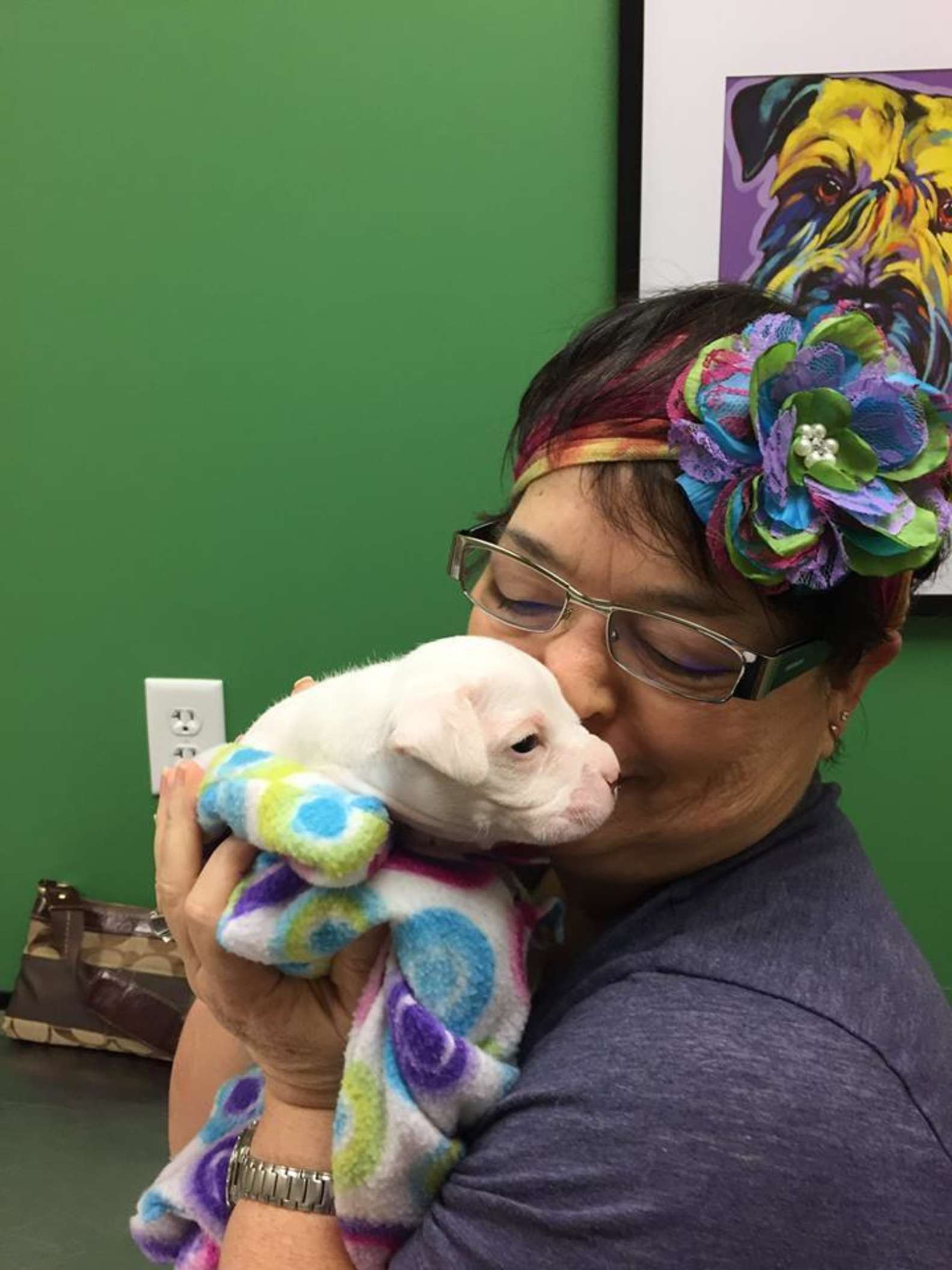 Nubby is back home now, with Robinson and her husband. He just turned 5 weeks old.

Until he is a little bigger, the doctors can’t probe him enough to find out the extent of his esophageal abnormalities. They don’t know if they are permanent and severe, if they can be treated, or if he’ll just grow out of the worst of it.

“We have no idea,” says Robinson. 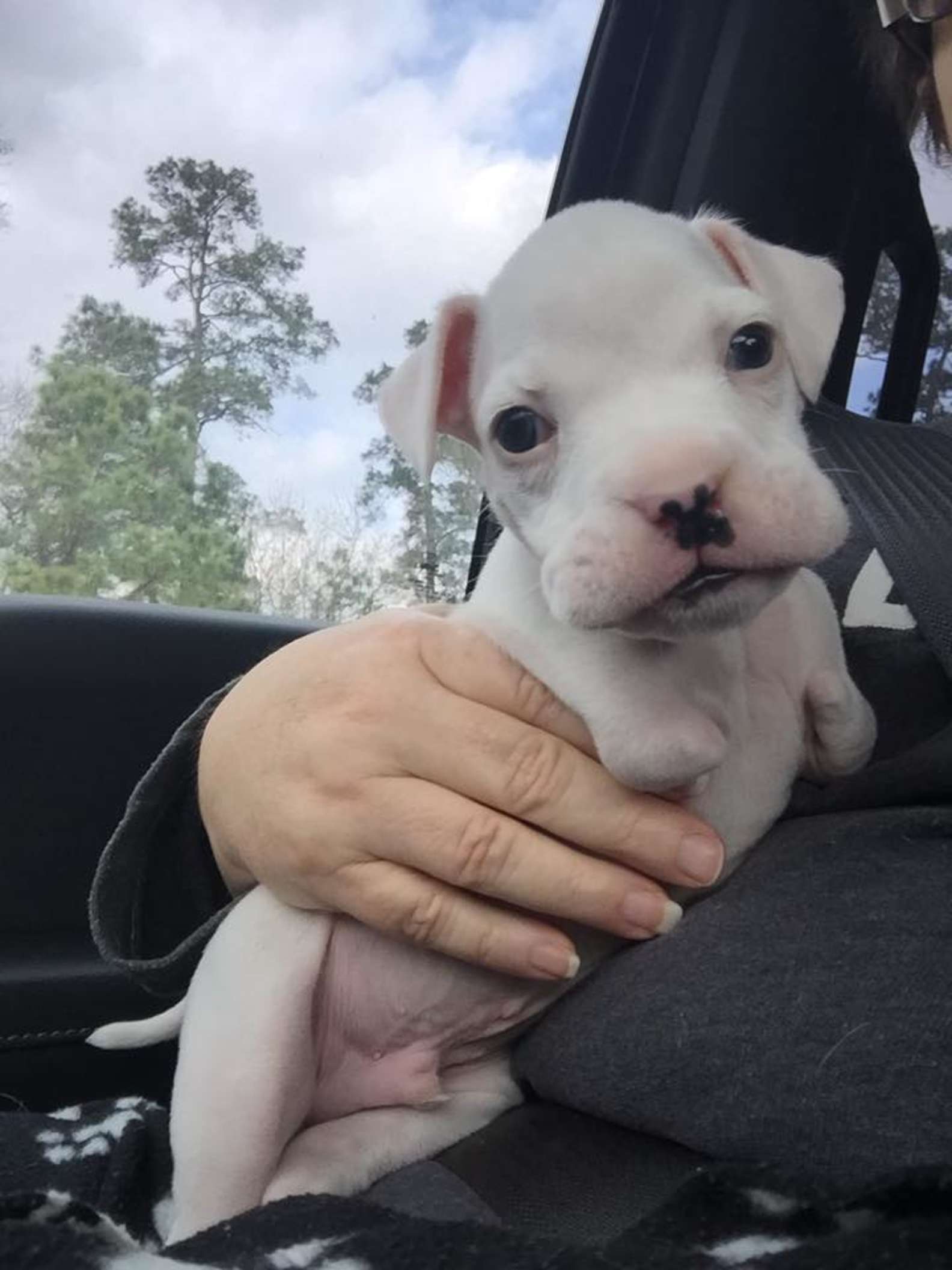 Robinson spends a lot of time watching Nubby. She likes the silly faces he makes while he sleeps. Then he wakes up and wants to play, play, play.

She likes to think about keeping Nubby. Having him grow up to be part of Warriors Educate About Rescue. He could go to schools, and teach about animal welfare. Help kids learn that it’s OK to be different.

That’s what Robinson’s hoping for. It will depend on a lot of good luck.

Nubby doesn’t seem to realize that he’s any different.

He is smart. He is active. He is learning to do an army crawl, and is trying to get up onto his back legs by pushing off from his face. He seems frustrated – “pissed off,” is how Robinson puts it – not to have mastered this move, quite yet. 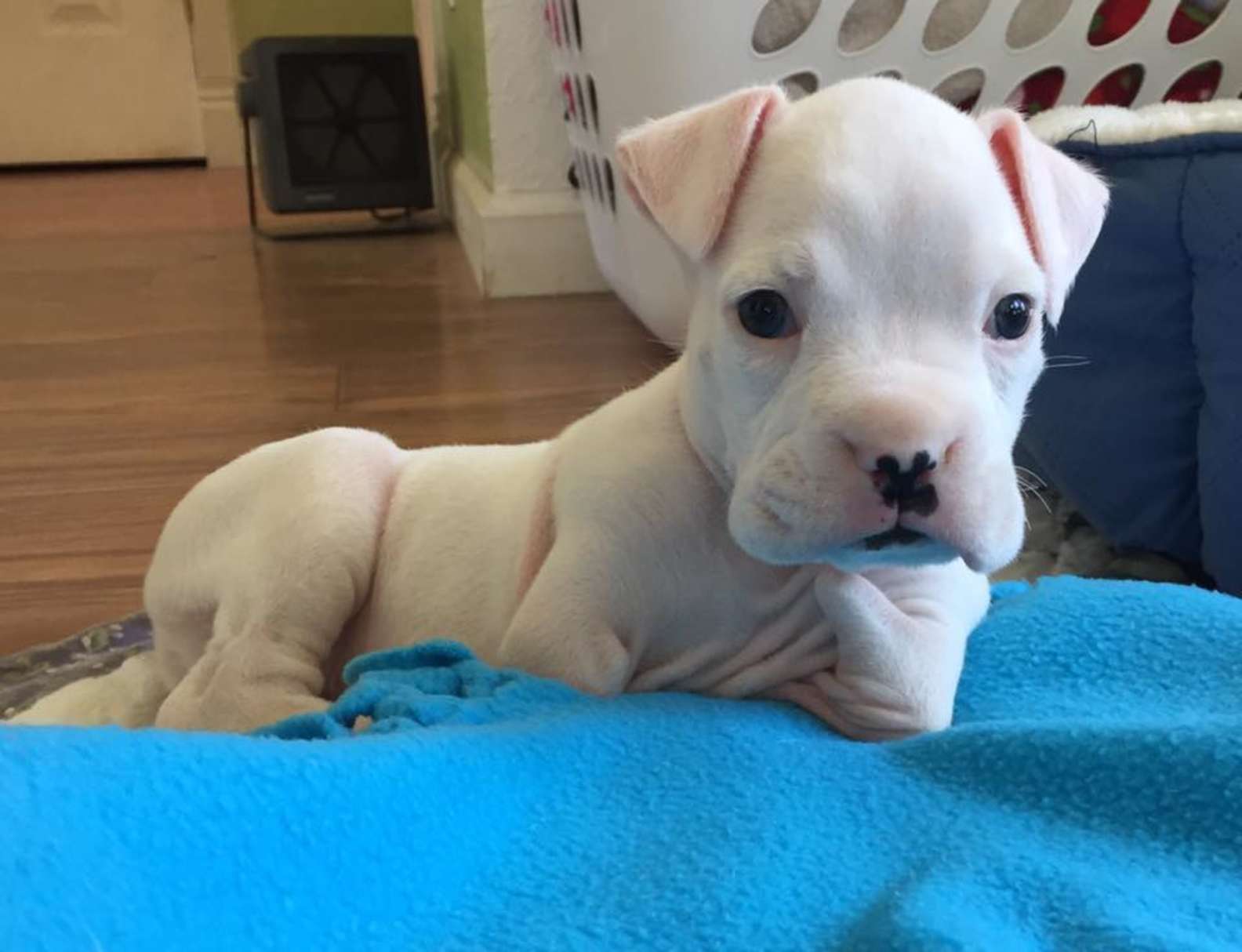