Airports can be pretty daunting places. Aside from the obvious stresses of travelling anywhere, there is extra security, queues everywhere and some of the worst priced and lowest quality food imaginable.

To quote the great Douglas Adams: “It can hardly be a coincidence that no language on Earth has ever produced the expression ‘As pretty as an airport’.”

Now imagine that, only your dog has just died. That’s the position that one traveller found himself in when Cora the Corgi showed up. Cora is a trainee therapy dog and seems to have a sixth sense for feeling the pain of others. “Cora just kind of walked around in our little seating area and said hi to everyone who was walking by and sitting near us,” her owner, Madison Palm, told the Dodo.

“She was taking a snooze so I let go of her leash briefly while I relaxed and had a snack; that is when she woke up and snuck over to him.

“Before I could even call her she was already at his feet being loved on.

“I asked him if she was bothering him and with a sombre face and watery eyes he said, ‘No, no; I lost my dog last night.’ He scratched behind her ears, patted her on the back and was whispering how cute she was.

“He took out his phone to snap a photo and she sat directly in front of him facing him and staying perfectly still for it.”

Cora is perfect at finding those who need a pup to cheer them up, but her own background is pretty painful.

She was rescued at the age of eight from a backyard breeder, who had used her to pump out puppies for sale. Corgis are a prized breed and go for a decent price, making them attractive to breeders.

Cora had already had 15 litters of puppies by the time she was rescued, but as her last litter included just a single healthy dog, the family that had her decided that they didn’t need her anymore.

She was only fostered by Madison Palm, but her temporary owner fell so hard for Cora that she ended up adopting her full-time.

“Cora’s personality is so amazing; she is a lover,” says Madison. “She is always right next to me and always keeps a close eye if she’s not. If I’m not available she’ll pick the next closest lap to sit on and nudges your hand unless you are petting her at all times. She is SO sweet and that is usually the first thing people say about her. Her gentle and kind nature never goes unnoticed.” 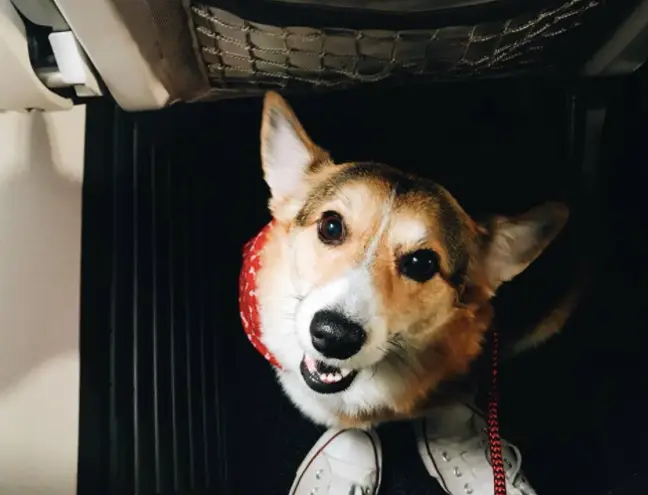 Credit: Madison Palm
She knows who is hurting and she knows who needs her. I’ve never questioned that. I am blown away by her on a daily basis. Who knew a dog who was unloved for seven and a half years could have so much love to give?”